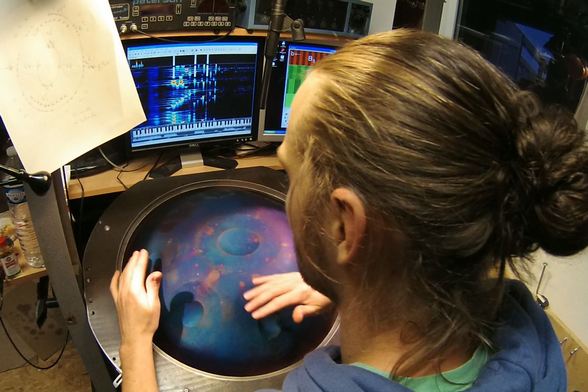 Following the path of (hand)pan

For a long time i was enchanted by the sound of the soundsculptures, but only a little more than a year ago my first instrument found me. A revolution took place inside of me, i was opened up to a new dimension – playing music. It is possibly one of the most fullfilling and blessing experiences a human being can have.

Of course i was intrigued to find out how a lump of steel can turn into something as beautiful as a handpan. These soundsculptures seem to be alive, to have a soul of their own, or at the very last be able to become a mirror of our own soul.

The deeper i dived into the marvelous world of handpan the stronger grew the desire to try and hammer on steel myself. When i met Matthieu from Shellopan at the end of last year and learned about his work, suddenly there was a chance to give in to this desire without investing a lot of money into equipement that i was not sure i could handle and yet still work with proven material (some of the most beautiful instruments i have played came from that very same material).

So finally there i was at the workshop of Shellopan, ready for the next step on the path of (hand)pan. To prepare myself i had spent hours and hours reading in the makers section of handpan.org, reading Panart's early publications, Ulf Kronmann's book on steelpans and of course reading in the „steelpan bible“ (Anthony Achong's „The secrets of the steelpan“).

Matthieu was ready too, he had put a lot of thought into the best way to introduce a greenhorn like myself into the woes and wonders of tuning steel. He decided that a reversed engineering approach would be the best way.

On the first day he handed me an old Shellopan prototype, an already glued instrument which was not in tune anymore and let me have my way with it. So i started with the last step of the process, the fine tuning. After about 8 hours of hammering, the conclusion i came to after my first day was: this is even harder than i thought! (and i didn't expect it to be easy) I had not only not managed to come even close to tuning one note on the instrument but got it way more out of tune than it was before.

The second day was dedicated to the step that comes before glueing and after shaping: the tuning of an open shell in the tuning ring. The shell had already been worked on and an experienced and skilled tuner could have finished this step quite quickly. Not me though ;-) I spent all day hammering on this shell and at the end of the day i had managed to come close to tuning two notes on this shell and ruining a couple more of them. Matthieu and Delphine saw the notes i had ruined as challenges and i learned a lot watching them correct my mistakes, while they explained to me exactly how they were going about it. That day before going to bed (which was inside the workshop, perfect to be fully immersed into the world of handpan production) i decided to try again on one of the notes on the prototype that i had hammered to be more than 300 cents sharp on my first day and, lo and behold, within 15 minutes linotune showed all three bars in green. What a wonderful moment!

The third day was finally the day to start on my own shell, but first Delphine showed me how to work on the interstitial areas and note borders with the airhammers. After that i started to draw the notes of the chosen scale (Amara in C#) on a raw shell. Matthieu pressed the notefields and after that i started to work with the airhammers. This step turned out to be a lot more difficult than it looked when watching Delphine and of course correction work from Matthieu was necessary again. After that the shell was put in the kiln to temper it (trying to go for a pink color as i wanted to build the first pan for my 4 year old daughter who loves all things pink). After that Matthieu showed me how to losen a note and then i started to work on the notes in the circle of this instrument #1.

This kept me busy all of day four and five. I learned how important the preparing steps really are for the tuning process and that attention to detail is key in every step. I managed to get some notes close to the desired frequencies (mostly within 10-20 cents) others were not as close and the lowest note i just couldn't get anywhere close. Matthieu tuned the central note, as i was afraid to mess it up. The central note is the best part of the finished instrument, he did an amazing job on it. Delphine in one turn tuned the circle of notes (the „choir“) in about an hour and then the first instrument i have ever worked on was ready to be glued. It is very hard to put into words how i felt, i hugged Delphine and Matthieu and was very very happy and excited!

The instrument came out surprisingly good, but that is only because every mistake i made was corrected again by Matthieu or Delphine.

This is a little attempt to recapture the experience of my week at Shellopan, but i feel it only scratches the surface. I haven't mentioned the warm and nice people i met and the creative and inspiring atmosphere i felt, the late night jams and conversations, the tasty food and the many beautiful shared memories i will forever cherish.

Thank you so much Matthieu for welcoming me into your home and sharing your knowledge, skills and wisdom with me! I will forever appreciate how much you helped me to get started on this never ending journey of tuning steel and can't wait to return soon.